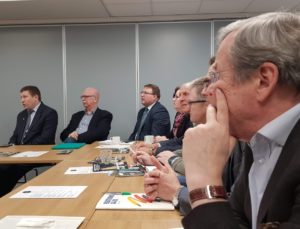 The Saimaa Canal has been in operation for 164 years. Today, the largest cargo flows to Saimaa region come from Russia, which is the region’s largest trading partner. The next largest and important partners are the Netherlands, Estonia, Germany, and Latvia, which all have active traffic and trade in the Saimaa region. Cargo is exported even as far as to France and to the United Kingdom from Saimaa. There is no year-round operation in the Saimaa Canal, and therefore the freight figures are not comparable with seaports.

The current fleet operating on inland waterways is very old, and there is a need for new vessels. The INFUTURE project has concentrated on this issue as well, and the new vessel types for the new Saimaa Canal are under planning. The demand for Volgo-DonMax vessels (max length 141.0 m; max width 16.98 m) is still high. Russian Marine Engineering Bureau is building dry-cargo river-sea going vessels. Total order book is 60 vessels, of which 27 have already been delivered, 22 are under construction, and the rest 11 are in reserve. Most of the delivered ones are modern river-sea going vessels. In addition, there are also two tug barges under construction. Unfortunately, these vessels are too big to navigate via Saimaa canal even after the extension of Saimaa Canal lock chambers.

Development of the Inland Waterway System

Another important issue is also the investment of about EUR 100 million made by the Finnish government for the extension of the lock chambers of the Saimaa Canal. This will allow larger vessels to pass through the Saimaa Canal with bigger cargo volumes. In Russia, there is also a need to develop the inland waterway system. Today the guaranteed depth is 3.6 m in the European side of the Russian Federation, but there are two parts where the depth is even shallower than 3.6 m. The Russian government is investing into inland waterway system to grant the depth of 3.6 m everywhere. There is a need to shift cargo from roads and railroads into inland waterways.

New cargo flows and routes to Saimaa are of high importance for Russia, including action for shifting cargos from roads and railroads into river-sea going vessels. Inland ports development in both countries and their wider connection into trade will foster local development on multiple fronts: industrial, social, etc. Saimaa’s infrastructural development shall stimulate the replacement of old fleet with new vessels. The limitations of the navigation period on Saimaa and on the Volgo-Balt is also hindering the smooth waterway operations between Finland and Russia.

Harmonisation of Rules and Procedures

There are differences in the legislation of Finland (EU) and Russia on inland water transport and on customs and border procedures. These require some harmonisation in order to develop the passage efficiency via Saimaa Canal. According to the plans of the Russian Federation, the maritime checkpoint will be located exactly in the middle of the canal, and if we do not start a dialogue on the optimisation of customs and border control procedures in advance this may cause problems for shipping from the beginning of operation under the existing rules.

The annual cargo to and from Saimaa is almost 1 million tonnes, and with domestic cargo altogether around 2 million tonnes/year. For comparison, almost 17 million tonnes of cargo is transported annually at Volgo-Balt. Nowadays the main cargo from Russia to Saimaa is timber: raw wood and wood chips. Fertilisers and chemicals as well as iron scrap, metal/iron pigs, and gravel could be potential cargo for this inland route. The most important regions for wood producers are Karelia, Vologda region, and Leningrad region. Neva Hagen shipping company is the Russian company that has been operating with Saimaa cargo for several years.

Pilot Voyage from Saimaa to Cherepovets

In the frames of the INFUTURE project we plan to carry a pilot voyage from Saimaa to Cherepovets with the company Meriaura. For Finnish partners, the idea behind this is to be able to estimate how it is to navigate with their own fleet in the Russian inland waterways. At the moment we are looking for a suitable vessel, and the VolgoBalt Administration has promised to help in defining the right size of the vessel for the pilot. UPM is willing to participate in the INFUTURE pilot project as a cargo provider. It would be a really good addition for the company, if vessels under the Finnish flag could enter the Russian inland waterways. Currently, wood is imported using Russian tonnage, and there is a need for more tonnage.

Within the framework of the INFUTURE project, a customer survey of Saimaa region stakeholders was conducted. In these discussions the environmental issues came up, and also the role of SMEs in shared cargo transport was underlined. The inland waterways could also be used in some project transports. Reliable cargo integrators with experience in a wide range of cargo and cargo groups in Lake Saimaa region are needed and they could develop new business models to serve for example SME. Currently, there is no container traffic in Saimaa, and very little in Russian rivers. European ports compete for the efficiency of transport chains and how to ensure logistics and make the whole chain competitive. Saimaa’s new dimensions and new vessels would also enable container transport. This possibility should be studied more, and there already is a particular interest in special containers.

A cost-effective, safe, and fast transportation route interests the stakeholders.

XAMK is preparing an analytical simulation model that can be used for simulating navigation in the Saimaa on larger ships in different conditions. At the same time, the utilisation of smart devices in navigation can be simulated. Calculations can be made of how long the journey would take by visualising different situations and repeating them. By analysing the results, new businesses can be developed. Within the framework of the project, there has also been discussion on a “transshipment hub” to serve the waterway traffic between Finland and Russia. The digital services play a key role here, with a possibility to assemble complete cargos, book ships and cargo space, get real-time information on fairways and ports, see descriptions of transport chains and alternative routes – and get clear offers on competitiveness of waterways.

New business models and a new attitude towards inland waterway transport are needed. Could there be some kind of incentives to support the companies in shifting their cargo into inland waterways and to develop the whole supply chain environmentally friendly? Lappeenranta, the port of Mustola, is the largest port in the Saimaa region, and has served as a transit port over the years. In addition to the Mustola logistics center, Lappeenranta has a passenger port and a marina, as well as an airport. Mustola has 7 piers and the location is ideal; 10 km from the center and 15 km from the border. Mustola is also significant as a storage area. The Saimaa Canal is close by and has good rail and road connections.

How to further develop Lappeenranta’s Mustola multimodal logistics centre, and specifically how to support the better utilisation of water transport? How to get industry and trade involved? How to manage the development of the entire transport chain and new service concepts, as well as marketing cooperation and information systems? Could the “Port of Saimaa” be the answer to all this?
The idea of the “Port of Saimaa” is to form a network of active cargo ports in the Saimaa region; Lappeenranta, Joensuu, Kuopio, Savonlinna, Imatra, and Varkaus. The “Port of Saimaa” would be presented to the clients and in the market as one big cargo port. If there is a commercial interest, it will be possible to solve most of the organisational and legal problems, including attracting new cargo, and issues on shifting cargo from road and rails into waterways. Continued dialogue and collaborative meetings such as round tables are needed between the stakeholders and administrative authorities.